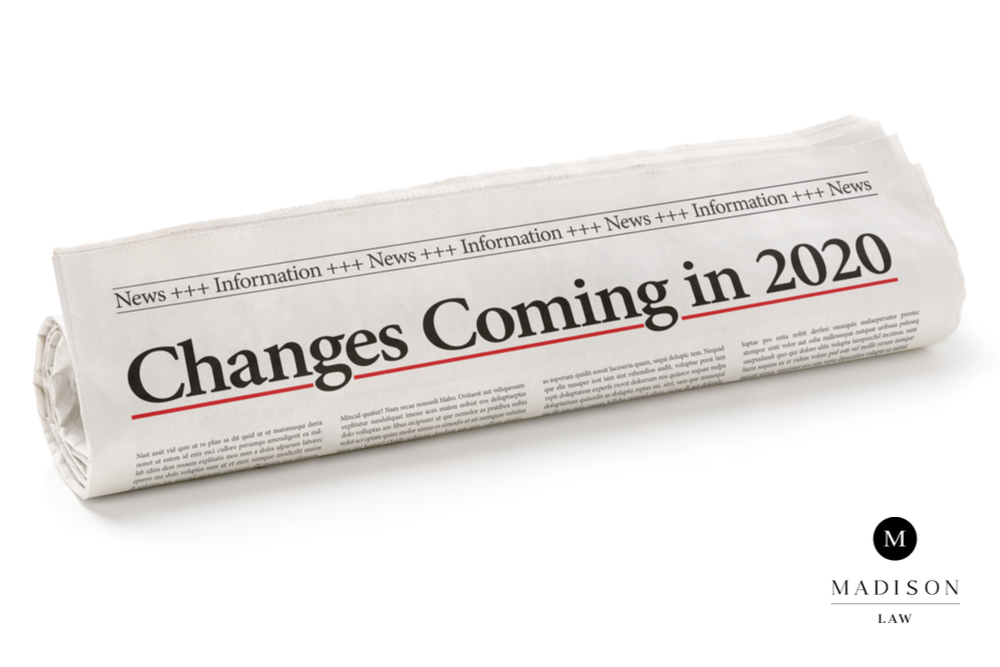 Dozens of new state laws are going into effect across California. From minimum wage to rent control to domestic violence, below are some of the key points of some of these new laws:

You might have started noticing that recently many websites have been providing notifications such as these:

On January 1, 2020, significant amendments were made to the California Financing Law.  Some such amendments came from AB 539, known as the Fair Access to Credit Act.  This law subjects consumer installment loans (e.g., personal loans, car loans, auto title loans) and consumer open-end lines of credit of $2,500 or more but less than $10,000 to an annual simple interest rate not to exceed 36% per annum plus the Federal Funds Rate. (See Cal. Fin. Code § 22304.5.)  This applies to all loans with an original principal balance under $5,000, including commercial-purpose loans.  Commercial-purpose loans of $5,000 or more are not subject to this cap.

On September 1, 2020, the current version of Cal. Pen. Code § 18170 will become inoperative and the new version will become operative.  Under existing law, an “immediate family member” of a person or a law enforcement officer may request the court issue a gun violence restraining order preventing the subject of the order from having in their custody or control, owning, purchasing, possessing, or receiving a firearm or ammunition for a period of one year.  Under the new version, who can request such is expanded to include: an employer of the subject of the petition; a coworker of the subject, if they have had substantial and regular interactions with the subject for at least one year and have obtained approval of the employer; and an employee or teacher of a secondary or postsecondary school that the subject has attended in the last six months, if the employee or teacher has obtained the approval of a school administrator or a school administration staff member with a supervisorial role.  Additionally, the duration of the gun violence restraining order is changed from one year to a period of time between one to five years.

Workers are more likely to be deemed employers rather than independent contractors.  Starting January 1, 2020 the California Legislature has codified the so-called “ABC” test in Labor Code § 2750.3.  This ABC test must be satisfied in order to classify a worker as an independent contractor and requires that (a) the person is free from the control and direction of the hiring entity in connection with the performance of the work, both under the contract for the performance of the work and in fact; (b) the person performs work that is outside the usual course of the hiring entity’s business; and (c) the person is customarily engaged in an independently established trade, occupation, or business of the same nature as that involved in the work performed.  This test is essentially identical to the California Supreme Court’s holding in Dynamex decided in 2018.  The Dynamex decision left ambiguities in the application of this definition to various industries.  The Legislature’s solution was turn this test into an eight page statute with numerous exceptions and ambiguities.  Regardless of the wording, you can expect the policy behind this statute to be reflected in future determinations by the courts – workers are presumed to be employees rather than independent contractors.

Employees have longer to bring lawsuits for retaliation and discrimination.  Starting January 1, 2020, the statute of limitations for certain retaliation and discrimination cases (usually in the employment context) is expanded from one year to file to three years to file under a modified version of Government Code § 12960.  As always, there are exceptions, and it is far safest for an employee to bring a claim immediately on discovery.

California has attempted to stymie attempts to compel employees to enter into arbitration agreements as a condition of employment.  California enacted Labor Code § 432.6, effective January 1, 2020, which prohibits an employer from requiring an employee to sign an arbitration agreement as a condition of employment.  As anticipated, this law appears to be preempted by federal law and has been temporarily blocked by order of the federal district court for the eastern district of California.  The new California law is not likely to survive as written.  However, employers should be wary, as there is no guarantee that the federal court will strike down the law and the law carries both civil and criminal penalties as against the employer.

The law bans landlords from evicting people for no reason, making it illegal to force people out so they can raise the rent for a new tenant. AB 182 also limits rent increases to 5 percent each year plus inflation, but never above 10 percent total. The rent cap does not apply to a property built within the last fifteen years (the limit is a rolling number, so the date housing is excluded changes each year).