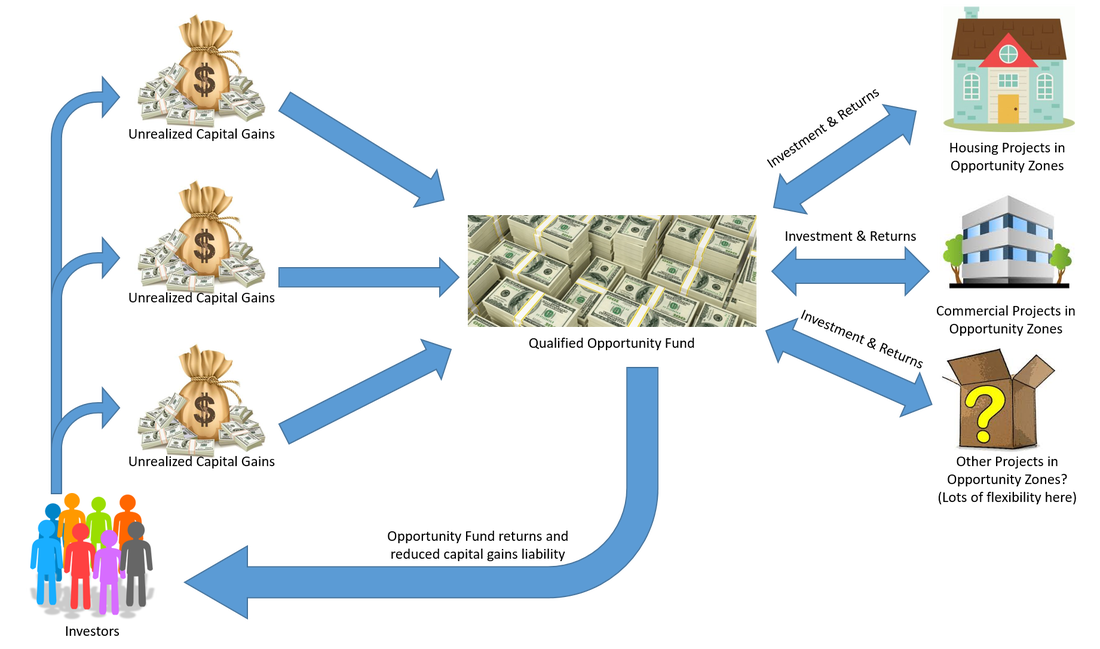 In 1976, New York City (“City”) was bankrupt and crime-ridden.  While City residents and businesses fled to avoid the City’s crisis, The Trump Organization and the Hyatt Corporation (collectively the “Partners”) bought the 25-story, 60-year old Commodore Hotel (“Hotel”) on 42nd Street near Grand Central Railroad Station in a run down and dangerous neighborhood.

To induce the Partners to invest $100 million to renovate the Hotel, the City granted them $400 million in tax abatements over 40 years, which materially increased the Partners’ return on investment.

The renovated Hotel opened in 1980 to success and changed the neighborhood to an attractive business location.  In 1996, Hyatt Corporation bought The Trump Organization’s initial $50 million Hotel investment for $142 million.

Fast forward to December 2017.  President Trump signs into law the Tax Cuts and Jobs Act of 2017 to create the New Market Tax Credit Program (“NMTC Program”), which encourages investment in poor communities, much like the City encouraged the Hotel investment, except this program encourages investment in poor communities all over America.  A poor community is defined as having a median family income at or below 80% of the area median and an individual poverty rate of 20% or more and is designated by the Internal Revenue Service (“IRS”) as Qualified Opportunity Zones (“QOZs) for 10 years.

These QOZs are found at https://www.cims.cdfifund.gov/preparation/?config=config_nmtc.xml.

Inside each QOZ, the IRS grants investors a tax credit against their federal income tax and other tax breaks in exchange for making equity investments in Community Development Entities (“CDEs”).  These CDEs are also known as “Qualified Opportunity Funds”.  CDEs may be a corporation, partnership, or a limited liability company (“LLC”), which has received a certification to be a CDE from the US Department of the Treasury’s Community Development Financial Institutions Fund.  These CDEs have to own at least 90% of their assets in QOZ Property (i.e. personal or real property invested in and located in the QOZ at issue).  Any corporation, partnership, or LLC (including those owned by the taxpayer) may apply to become a CDE.

To obtain the NMTC Program tax credit, an investor has to invest cash with a CDE to obtain an equity interest (i.e. become a shareholder in a CDE corporation or partner for a CDE partnership or a member for a CDE limited liability company).  A valid CDE investment is evidenced by a Form 8874-A, Notice of Qualified Equity Investment for New Markets Credit.  The CDE has to provide this form within 60 days of the investment date.  The investments made by the CDE into the QOZ are referred to as a Qualified Equity Investment (“QEI”).  Valid QEI may be investments in new or substantially improved tangible (real or personal) property, such as commercial buildings, equipment, or multi-family complexes.  A “substantial improvement” in QOZ Property requires a CDE to invest at least the same amount in the property in addition to the amount initially invested in the QEI within 30 months of the property’s acquisition.  For example, an initial QEI of $10,000 into QOZ Property must be matched with an additional investment of $10,000 to improve this property within 30 months of the QEI being made.

A valid QEI investment in a business in a QOZ requires the business derive at least 50% of the total gross income from the active conduct of a trade or business in the QOZ and less than 5% of the investments may be in financial assets.  Invalid investments for QEI include investments in golf courses, country clubs, massage parlors, hot tub facilities, suntan facilities, gambling businesses, and any store that sells alcoholic beverages for off premises consumption.

NMTC Program investments in non-real property with asset-lives less than 20 years can be depreciated 100% when placed into service before 2023 under an increased depreciation deduction for new equipment that is capped at $1 million each year.  These deductions may be used to offset other income – even passive income -- of a taxpayer.

The holding period for an investor in a QEI is measured from the date of his investment in the CDE (the “Investment Date”).

Due to poor drafting, the tax benefits of the NMTC Program are unclear for investments that occur after 2019.  The current program is set to end on December 31, 2026 unless a new law is passed to extend the program.  This means that a taxpayer must invest by the end of December 31, 2019 to obtain the 7 year increase in basis on any capital gain invested in the program by the end of 2026.

A taxpayer can sell any existing investment (which could be stocks, bonds, commodities, real estate, equipment, a business, etc.) that has appreciated in value to produce a capital gain.  To defer capital gains taxes on this gain, the taxpayer has to invest the gain into the NMTC Program within 180 days after this sale.  The taxpayer may also invest the cost basis of this investment that produced this capital gain.  This initial investment by a taxpayer in the program through a CDE – which is usually only a capital gain -- is referred to as the “Initial Investment”.

At the end of year 5 from the Investment Date, the capital gains tax on the Initial Investment is reduced by 5% by increasing the basis in the investment by 5%.

The foregoing tax effects are set at the Federal level of taxation.   A state may elect not to defer the tax on the gains as set forth above.  If this occurs, then the taxpayer would have to pay capital gains taxes on his investment in the CDE without any deferral and nonrecognition as the NMTC Program provides.

In summary, the NMTC Program offers an investor into this program through a valid investment in a CDE with valid QEIs in QOZs with the following Federal tax benefits:

The NMTC Program has tax advantages over a “Section1031 Like Kind Exchange”.

First, the NMTC Program permits any type of property to be invested in a CDE as the Initial Investment (such as the sale of common stock may be invested in the program) while a Like Kind Exchange is limited only to real property used in a trade or business being sold and reinvested in real estate.

Second, the NMTC Program only requires capital gains be invested as the Initial Investment (and not the initial cost basis invested to produce the capital gain in the Initial Investment even though you may invest the cost basis too) while a Like Kind Exchange requires at least 95% of the sale proceeds (i.e. both cost invested and gain) of the relinquished property (the property you sell) to be invested in the replacement property (the property you buy with the sale proceeds).

Third, the NMTC Program does not require an intermediary to invest the Initial Investment while a Like Kind Exchange does.

If you are an investor and you have sold appreciated assets (i.e. they have a capital gain) within the last 180 days or just have money to invest with no capital gain at all, contact the attorneys at Madison Law, APC to guide your investments into a New Market Tax Credit Program or Section 1031 Like Kind Exchange to defer, reduce, or maybe avoid all together capital gains taxes to enhance your investment returns.